IS STOCK MARKET ONLY FOR RICH PEOPLE?

One of the biggest myths about investing in the stock market is that it is an exclusive club of ultra-rich and big brokers.

The perception is that India’s $3.5 trillion worth stock market is a playground just for investment banks, Indian billionaires, and corporate houses.

Two centuries after the informal launch of India’s first stock exchange, the popular belief remains that the primary role of a stock market is to fund companies and a platform for investment banks to make billions of dollars overnight after a public offering of stock.

The stock market is a storehouse of complex products, exclusive casinos for brokers and rich people, wherein the entry is restricted to normal, ordinary investors. Yes, the rich are born rich.

The financial dailies’ click-bait headlines like “Blood-bath at Dalal Street”, “Crores Wiped Out As Market Crashes”, “Fright Night at the Stock Market”, “Inflation Fear Fuels Bond Rout”, “Fear and Uncertainty in Cattle Markets” and the complex charts appearing on the pink pages on daily basis often suggest that stock market is not meant for ordinary investors.

Fear keeps people away from the investment world. Instead of investing, people prefer to tuck away their money in a rather illiquid savings account. Ask any potential middle-class investor why he/she doesn’t invest in stock market. They will confess they are too afraid to join the investing world.

It seems these potential investors strongly believe in Benjamin Graham’s words : “Individuals who cannot master their emotions are ill-suited to profit from the investment process”.

Ask who has made the most money on global stock market? Google will tell you they are none other than the ultra-rich John Paulson, Warren Buffett, James Simons, Ray Dalio, Carl Icahn, Daniel Loeb. The story repeats in India as well.

Consider the Indian millionaires who have larger-than-life reputations when it comes to investing. Their resources for research, as well as their intimate connections to insiders and others, can give them unique insight into their stock picks. Ordinary investors cannot fathom which stocks these millionaires are chasing with their huge capital or which stocks they are selling off for that matter.

The year 1991. The then Finance Minister Dr. Manmohan Singh’s budget presentation in the Parliament changed India forever! The economic reforms kick-started in 1991 brought about a liberalized investment regime. 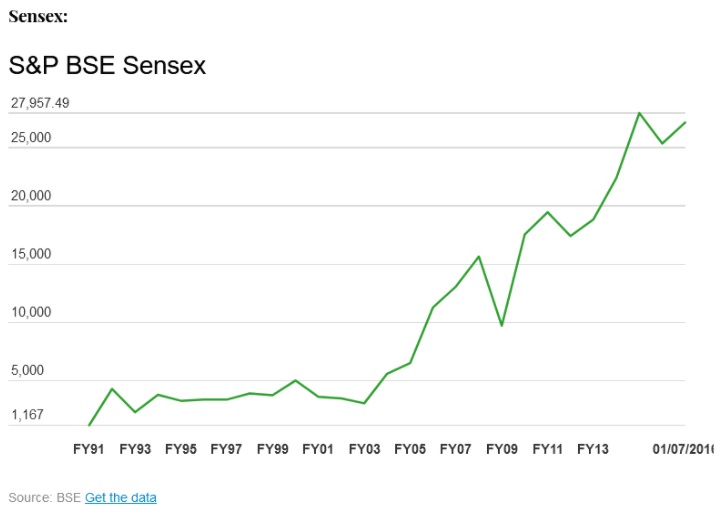 Empirical data tells you that the major beneficiaries of India’s stock market activities have always been ace investors. The post liberalization market witnessed a series of IPOs, where investment bankers, big brokers and international investors acted as major players.

In total, the year 2000 produced 446 IPOs with gross proceeds of $108.15 billion. India’s potential ordinary investors, especially those from rural areas, stood as mere spectators of the Big Bull Gamble.

The animal spirit in the market was followed by a series of scams that shook the Indian stock market. These scams reinforced the faith of the Indian ordinary investors that stock market is a money-making machine meant just for big investors.

The Asian economic boom coincided with the India’s stock market adding exotic and complex financial products, which was available only at developed markets until 1990s. Leave alone ordinary investors, even professional investors unfamiliar with the abacus entered into the complex transactions that they rarely understood.

As they failed to understand the knowns and unknowns in the dazzling world of derivatives, a large number of India’s ordinary potential investors preferred to stay away from this market.

The big brokers also played their role in keeping the potential investors away from directly participating in the market.

A section of influential brokers strongly opposed the stock exchange made its first move to introduce electronic trading in late 1990s. The stock exchange’s initiative to bring in greater trading efficiency, lower transaction costs, lower commissions and improved price discovery and greater pricing transparency were openly challenged by the brokers.

The stock exchange invited a Nobel-Prize winning US financial economist to speak at a conference in Mumbai in 90s, seeking to win over the brokers to electronic trading. During the Q&A session, a broker was more candid. He told the celebrated guest speaker: “I will be dealing in market circumstances when my clients will not be having a clue as to what the price will be being. Tata shares may be trading at rupee 100. My client will not be knowing that factor. I will be telling him that Tata is trading at rupee 105. I will then be selling him the shares at rupee 105 plus my spread of one rupee plus my commission. He will be most happy. I will also be most happy..... The guest speaker looked stunned." ("Traders, Guns and Money" - Satyajit Das) 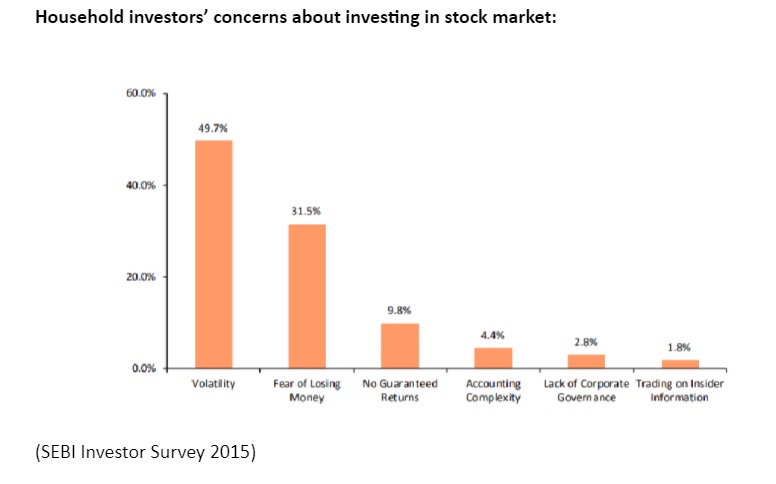 Understanding how to invest in stock market is all about dispelling popular myth that this space is exclusively meant for rich and mighty. This myth is a half-baked knowledge and incorrect understanding of the nuances of Indian share market.

The truth is that the post-globalization era witnessed a major shift in the stock market investment trend in India, with significant increase in the number of individual investors. This rise of individual investors is a part of a broader shift among Indians, away from the traditionally preferred physical assets, such as gold and real estate, as well as bank deposits.

If the Industrial Revaluation was instrumental in the emergence of a high-earning middle class in the Western World, it was India’s LPG (Liberalization, Privatization and Globalization) policy that caused a sustained rise in real income per person in the country and its effects led to a major shift in the stock market investment trend in India.

The country’s burgeoning middle class, a robust consumption expenditure growth, the proposed policy changes and infrastructural investment plans from the government should help it to remain one of the fastest growing global economies in the near future, attracting significant number of new investors to the stock market.

The fast-increasing market participation shows that you surely don’t have to be a millionaire to buy stocks in the Indian markets. To create wealth in the stock market you don’t have to make mega investments. You just need to start early and then keep investing consistently over a period of time.

The fast-growing market participation of retail investors tells us that you don’t have to be a Warren Buffet to find best stocks to invest in. You don't need to be a market expert to invest in the stock market.

Over the last twenty years, the technology revolution has had an intense and irreversible impact on the Indian stock market. The stock market is not just for rich people and brokers; with the data and research tools now available online, the stock market is more accessible to the public than ever before.

A deeper internet penetration has made financial products and services available to more customers and eliminated geographical barriers.

Earlier, investors were solely dependent on their brokers but nowadays they are participating more in buying and selling of shares with the help of internet. Internet penetration is attracting more individual investors to the market and we are witnessing an increasing trend of avoiding sub-brokers.

The data and research tools previously available only to brokerages are now available for individuals to use. Moreover, discount brokerage, and robo advisors allow investors to access the market with minimal investment.

The paperless trading environment has reduced manipulations to a large extent and financial markets have started rewarding companies. Although threats are growing and getting increasingly dangerous, but technology is available to enable secure e-commerce experience. Through digital commerce, the rural user can access services and data easily and effectively.

All we need to look at carefully is to create a robust and safe infrastructure for carrying out this activity of users though online or mobile gateway. India’s 5G rollout is on track. Fast internet connection, if provided at lower prices, can give a boost to India’s capital market regime.

Data available on public domain shows that India’s liberalization policy has contributed to the development of Indian Stock Markets in a big way with the renewed interests of individual investors.

India is one of the top countries in which the fastest growth of DEMAT Accounts (account used for keeping and investing shares and securities) is experiencing.

In 2018-19 India has Rs. 3.59 crore in such accounts which increased to Rs. 4.08 crores in 2019-20 and further increased up to Rs. 5.15 crores till January 2021. It shows improvement in investing habits of Indians as in developed countries”, say Dr. Parmil Kumar and Leshwant Kumar, in their study “Impact of Globalization on Indian Stock Market”. 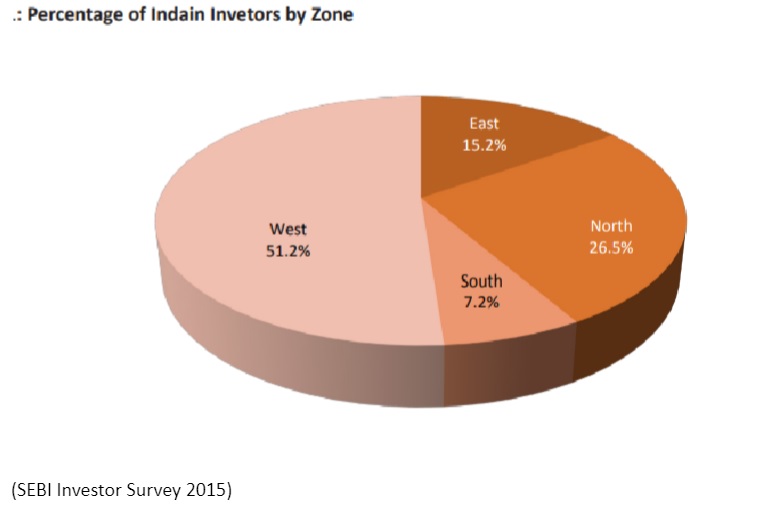 This rise of individual investors is a part of a broader shift among Indians, away from the traditionally preferred physical assets, such as gold and real estate, as well as bank deposits.

The investing pattern has also changed across regions over the past two years, although the northern and western Indian regions continue to dominate in terms of the total number of new registrations. As of June 2021, Northern India accounted for about 37% of the total registrations, while East and South India saw an increase in retail interest, as compared to 2020.

Of course, India’s investment industry has come a long way from that 1990 July morning when the world woke up to read the splash news that the country’s central bank pledged 46.91 tones of gold with the Bank of England and the Bank of Japan to raise $400 million to avoid a default in international payment. Thanks to the bold LPG policy, in 2009 India bought 200 tones of gold valued at $6.7 billion to diversify its assets.

Data from the Reserve Bank shows that the central bank held 743.84 metric tones of gold as of September 2021. India is adding more gold to its rising foreign exchange kitty of $640 billion. The wheel had come full circle.

Going forward, India needs to have strong financial markets to become a developed economy. When more people will participate in the market, there will be a gradual shift in the economy, businesses will flourish, GDP will increase, the market will expand.

There is no doubt that in the past few decades the country’s policymakers have promoted the capitalist theory of economy and eventually led to the rapid development of the capital market. The pace of reforms has to be further accentuated and ensure the individual investors are playing a bigger role in the wealth creation.

On the country’s march to touch a 5 trillion-dollar mark economy by 2025, the Indian stock market has to be friendlier to the individual investors by boosting performance and eliminating the inherent challenges.

When more people will participate in the market, there will be a gradual shift in the economy, businesses will flourish, GDP will increase, the market will expand, etc. India needs to have strong financial markets to become a developed economy. Unable to Login? We are here - hello@kundankishore.in
Cart ( Items )
There are no items in your cart
Add More